If humans ceased to exist, 3.5 million tons of garbage would remain uncollected from Japan to California. This means more plastic waste would roam the streets, forests and oceans. It wouldn’t be surprising if we woke up 1,000 years later to see plastic McDonald’s glasses still lying in the area. But not all is bad news, as a lack of people would do a lot of good for the planet and all its properties.

We collected 8 surreal hypotheses that would come true if we slept for 1000 years.

1. Forests would have grown back everywhere on Earth. A severely damaged rainforest takes more than 4,000 years to fully regenerate. This is because human activity makes it harder to get your work done faster. So if man did not exist on the planet, all the elements of trees and nature would grow back much faster than expected.

Animals living in forests would also start to reproduce as they would have plenty of food at their disposal. And animals are key factors in the regeneration of cleared forest areas. In addition, shade-loving trees would have plenty of time to find their place. This procedure would take more than 160 years.

2. A huge number of buildings would collapse. Most roof shingles used to build homes are made for a lifespan of 20-30 years. This is followed by leaks and other problems that require human intervention to fix. The moment the roof starts to leak, it’s only a matter of time before the water scorches the wooden roof structure and walls. Because of this, wooden structures would be the first to fail.

Glass and metal structures would also begin to decay very quickly. So you can forget about these super tall and posh skyscrapers where your workplace is located. The only building that is likely to stand even 1000 years from now is made of stone.

3. The planet would have been pitch black. On the first day after people fall asleep, most fossil fuel-fired power plants would shut down, resulting in power outages worldwide. Only Times Square and Las Vegas would have light for a few more days. All the food in our fridge would be attacked by cockroaches and mice, which now rule the world.

In addition, many water-pumped subway systems would fail, flooding the tunnels in 36 hours. In Alaska, oil storage tanks would overflow and then explode later. The oil would start to leak and several liters of oil would end up in the ocean.

4. Most pets would become extinct. Animals like puppies and sheep would be the most vulnerable and at high risk. Even if they stay in a building, sooner or later they will run out of food and be forced to come out and search. Larger dogs such as German Shepherds, Shepherds and wild breeds will be able to adapt in the wild and protect themselves.

Cats would probably also be able to adapt to their new lifestyle. However, they will have to harden a little to survive. Dogs that have escaped from dog runners and dog battle arenas will have no problem surviving. Their competitive and wild nature will help them dominate the weaker breeds.

5. Many of the world’s monuments would be history. Corrosion is one of the greatest enemies of any material from which our beautiful monuments have been built. Only gold is immune to corrosion over time. Today, air pollutants are the number one cause of corrosion, and this is why people today need to constantly maintain and improve their homes. But even if human activity suddenly ceased, this problem would not disappear.

This is because metals are damaged simply by the presence of oxygen. As a result, they begin to rust, which sooner or later results in their failure. And if there were no person to take care of the problem, the devastation would be even greater. 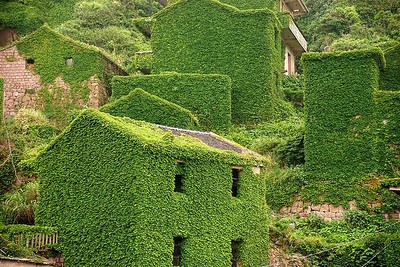 If human activity ceased, grapes and amber would only take 5 years to occupy the exterior of buildings. For example, the Chinese village of Houtouwan was depopulated in 2002, and 2 decades later nature completely took over. Many buildings are completely overgrown with grapes and amber. So one can imagine how much worse the situation would be after another 980 years.

7. Many cities would be submerged. Cities like Amsterdam, thanks to drainage systems, dams and bridges, still exist. They all keep the ocean away from our cities and prevent disasters such as floods and tsunamis. But if people were not there to maintain these systems, the power of water would destroy them. Huge amounts of water would enter our cities and our former homes.

Nevertheless, cities like New York City, Miami and New Orleans would likely be submerged. According to today’s data, these cities would experience an extreme rise in water levels in all of them by 2070. But without people, such an event would happen in a much shorter time.

8. People should fight to get their cities back. Again, humans would have to fight for their survival as they would have to face wild animals. Their ability to cooperate and work in groups would be key to being able to dominate other living things. They would still remember how to make friends with animals like cats and dogs. The main difference between now and the beginning of time is that they still have the remains of their old cities.

They would already have all the technical knowledge to rebuild everything into the old wheelhouse. However, they would have to develop a primitive mindset to hunt for food and defeat other big beasts. But, as mentioned above, their ability to work together would help them in this.